Time has flown by since Henry has made his appearance into the world. It’s been such a whirlwind and I can’t believe he is already two months old! This blog post is partially for selfish reasons, so that I can be sure to remember all the moments leading up to his special arrival. I was inspired by another bloggers birth story and I wanted to share mine!

My pregnancy was pretty standard. I did have a few hiccups though! At our 20 week ultrasound, when we found out that Henry was a boy, we were also told he was measuring small. The doctors questioned family history and a few other things, but never really did come up with an answer on why he was so small. This lead us to check in on our little man every month to check his growth with ultrasounds. Luckily, he was growing and two months later they decided there was nothing to worry about since he may be small, but was growing at a nice rate. Whew!

Then on a Thursday afternoon at about 34 weeks, I had an appointment with my OB. Nick (my husband) travels a lot during the fall. This year his travel was all planned to end by September so just in case Henry would should up early (not that we ever thought that would actually happen), he would be around! I brought my mom with me for some company and so she could hear Henry’s heartbeat. We planning on going shopping after to finish up his nursery. This appointment shook things up as my blood pressure was much higher than it normally is and I learned how serious they took this during pregnancy. I was told if it was a couple points higher I would’ve been sent right to labor and delivery… and Nick was away!! They hooked me up to a stress test, and he seemed fine and gave me a lot of tests for preeclampsia. Thank goodness my mom just so happen to be with me that day! I tested negative for preeclampsia and was diagnosed with gestational hypertension with a chance of preeclampsia developing as the weeks move forward.

The following few weeks my blood pressure was monitored very, very closely by my wonderful doctors. It was a little overwhelming as each appointment we heard a different story of when he would come, but one thing stayed constant, they wouldn’t let me go past 39 weeks. At this point we knew there was a chance that I could end up in the hospital after any of these appointments, so our bags were packed and ready to go!

Since my blood pressure was on the fritz, I was checking it twice a day at home. They gave me a threshold and if it reached that, call them ASAP. Well sure enough on a Saturday night, that threshold was met and they sent me right into the hospital. I was such an emotional mess because I felt like it was too soon. We got there and stayed in triage while they monitored him and gave me those preeclampsia tests again. Ultimately they sent me home once everything checked out, but told me as soon as I get to 37 weeks, it’s probably going to be time.

That Monday I had yet another doctor appointment and in the back of my mind I kind of knew what was coming. The OB gave me two options… head into the hospital now or schedule an induction ASAP. I opted for the “scheduling” (I put that in quotes because they call you when a bed is ready) so that we could catch our breath and that I could have my husband with me! I called him in the parking lot bawling my eyes out. Why I was crying, I’m not exactly sure why. I think because it was all becoming really real and I just wanted both Henry and I to be okay!! We took the evening to “relax” and enjoy one last date night. As we were out, another hiccup occurred… I felt so sick. My throat was killing me! Lucky for me, I got a cold right as I was about to get induced into labor, haha!

Right before our date night!

We then waited for our call to go into the hospital. We were told anywhere between 9 pm to midnight (yawn), but could be later than that. As we were anxiously waiting, midnight hit and I said I quit, I’m going to bed. A second later, my phone rang! We jumped into the car and got to the hospital by 1 am. By time we were in our room and the induction was started it was about 2 am. Oh and I still felt so sick and now I wasn’t allowed to eat anything. Shoutout to my Dr who ultimately felt so bad for me and my sore throat and let me have some chicken broth and jello!

Now my body wasn’t exactly ready to be in labor yet. I wasn’t dilated or effaced or anything! So basically, I had to go through a ton of steps before the actually induction started. They kept telling me that this process can take days… yes, DAYS! Ugh! Thankfully, my body responded beautifully to all the different steps they took to get my cervix ready and I didn’t have to repeat any. Finally, I was 5 cm dilated sometime in the afternoon. I had contractions coming and they were getting stronger but, bearable. The doctor said it was time to getting the induction started and she wanted to break my water, as well as, get the Pitocin IV going. I wanted to get my epidural before then, which was a not so fun experience for me. They had trouble finding a good spot in my spine as I have a little curve and I think that may have been the scariest part of my labor! Let’s just say I was poked at too many times during that process where I was about to say forget it and deliver naturally. But, they got it (finally) and I’m SO thankful for modern medicine and that they finally found a good spot on my back to inject it. Mad props to any moms out there that have done this without one! After every step of this process they kept telling us, “it could be a few hours, get some rest”. I’m not exactly sure how I was supposed to sleep, hah! At this point we have gone through two sets of nurses and the doctor on call. The next doctor on call was my favorite! I was so excited that she would be the one probably delivering our baby. She got in and checked me out telling me that I was at 7 cm dilated, but it’ll still be a few hours. At this point my parents were too anxious to be at home and were already in the waiting room and Nick’s parents were on their way in from Michigan. Nick went out to give my parents an update and holy moly the pressure that came upon me was unbearable. I told the nurse I think it’s time and she laughed telling me the Dr was just in here saying you have a few hours, I’ll get the anesthesiologist in to get you more pain medication. Well the anesthesiologist came in and tried to talk me when I literally could not speak and said she wasn’t going to give me any more meds because she thinks it’s go time and to get the doctor back right away! Thank goodness for that women! Oh wait, Nick wasn’t in the room because he thought we had a few hours. I’m so happy my phone was on me and I texted him saying “Get back now!!” All I remember from there is him running back into the room and the next moments were such a blur. I remember the doctor coming and telling the nursing staff and me that it’s go time! I’ve never been so motivated and pushed my little heart out, listening carefully to the nurses instructions, screaming (so loud that my Mom heard me out in the hallway, heh!) and squeezing Nick’s hand. What felt like 5 minutes later, Henry Alan Hinkle was on my chest (it was actually 30 minutes). They announced October 18th at 8:02 pm as his time of birth and I couldn’t believe it, he was finally here!!! I was flooded with emotion and love in an instant. It’s truly such a magical feeling that is hard to describe. He was healthy as can be and I felt like super women! Nick cut his cord and there we were, a family of three. Nick and I just looked at each other and him over and over again with big, goofy, tired smiles on our faces. As they wanted to take Henry to get his measurements, he had a strong grip and wouldn’t let go of me… that is a moment I will never forget. He wanted his momma, and that was me. 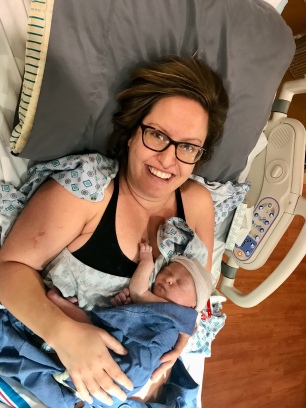 *Disclaimer: Please don’t judge any typos or grammar with this post! Things need to be done much quicker with a newborn in your arms!**

Hi, I'm Anna! Follow along as I navigate my way through motherhood, fashion and all things in between. Thanks for visiting!

Guys, he thinks self timer photos are such a fun game. 😂 He gets so excited to run, wait ten seconds and then see the picture... or maybe he’s just a blogger in the making. 𝐓𝐫𝐲 𝐢𝐭 𝐰𝐢𝐭𝐡 𝐲𝐨𝐮𝐫 𝐤𝐢𝐝𝐬 𝐚𝐧𝐝 𝐥𝐞𝐦𝐦𝐞 𝐤𝐧𝐨𝐰 𝐡𝐨𝐰 𝐢𝐭 𝐠𝐨𝐞𝐬! 🤪 Maybe you’ll get some fun photos out of it. ⁣ ⁣ But my #ootd is from two of my favorite boutiques today! Good Vibes Only tee from @jmboutique and the worlds most comfortable joggers from @lane51btq. 💕
My quarantine crew. 💕Who are you #stayinghome with?👇🏼
𝐇𝐨𝐰 𝗪𝐨𝐮𝐥𝐝 𝐘𝐨𝐮 𝗪𝐞𝐚𝐫 𝐈𝐭- 𝐐𝐮𝐚𝐫𝐚𝐧𝐭𝐢𝐧𝐞 𝐄𝐝𝐢𝐭𝐢𝐨𝐧...⁣ Black Leggings 7 Ways or 7 Days, you decide! Happy Friday! 💕
𝗪𝐞 𝐚𝐫𝐞 𝐚𝐥𝐥 𝐢𝐧 𝐭𝐡𝐢𝐬 𝐭𝐨𝐠𝐞𝐭𝐡𝐞𝐫, 𝐩𝐥𝐞𝐚𝐬𝐞 𝐬𝐭𝐚𝐲 𝐡𝐨𝐦𝐞 𝐚𝐧𝐝 𝐰𝐚𝐬𝐡 𝐲𝐨𝐮𝐫 𝐡𝐚𝐧𝐝𝐬. 💕⁣ ⁣ Thank you to all those who are essential and putting themselves and their families at risk to serve so many of us right now. ⁣ ⁣ Also special thanks to @themillennialmommie for organizing this photo to keep spreading awareness!
𝐃𝐚𝐲 #𝟐𝟎 of quarantine and I’m officially committing to putting a little make up on... at least once a week... or maybe at least for my zoom dates to feel a little normal!? 😅 As I’m getting more comfortable with this unfortunate uncomfortable feeling I’m working on posting again. So stay tuned and thanks for hanging in there with me. 💕 ⁣⁣ ⁣⁣ 𝘉𝘶𝘵 𝘪𝘯 𝘵𝘩𝘦 𝘮𝘦𝘢𝘯 𝘵𝘪𝘮𝘦, 𝘐 𝘢𝘭𝘴𝘰 𝘸𝘢𝘯𝘵𝘦𝘥 𝘵𝘰 𝘴𝘩𝘢𝘳𝘦 𝘮𝘺 𝘧𝘢𝘷𝘰𝘳𝘪𝘵𝘦 𝘵𝘪𝘦 𝘥𝘺𝘦 𝘤𝘳𝘦𝘸 𝘯𝘦𝘤𝘬 𝘪𝘴 𝘰𝘯 𝘴𝘢𝘭𝘦 𝘧𝘰𝘳 𝘶𝘯𝘥𝘦𝘳 $𝟷𝟼!!! ⁣⁣ ⁣⁣ Follow me on the LIKEtoKNOW.it shopping app to get the product details for this look and others (link is in my bio). http://liketk.it/2MkDp ⁣⁣ #StayHomeWithLTK #LTKspring #LTKsalealert #liketkit @liketoknow.it.family @liketoknow.it
Before things got weird, I went into @loft for a spring try on... And now all of this is 50% off plus free shipping!!! 🤑 It’s all linked in my LIKEtoKNOW.it profile. 💕 Happy shopping!
Follow Anna Hinkle on WordPress.com